Quite a lot going on recently, carpets finished and seats in. That means the dashboard could be finished if only the replacement white voltmeter would turn up!

If I ever do another car it will not have carpets, they have been a nightmare. 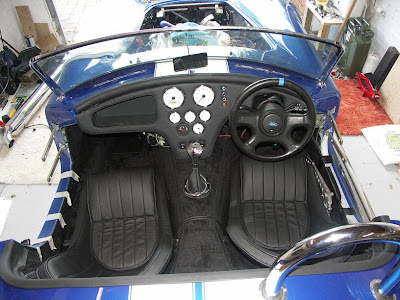 Anyway, at last I've moved onto the side pipes, This required a 5" square hole in the body with no way of measuring it from the outside. Ah well they'll just have to be a bit bigger ;-)

The four way side pipes 'push' onto four separate down pipes from the engine - yeah right !! Not only do the four pipes not line up, they do NOT push together. The offside pipes eventually went in with a bit of encouragement from a very big hammer. The nearside didn't want to know so we'll go into battle with them again tomorrow LoL. 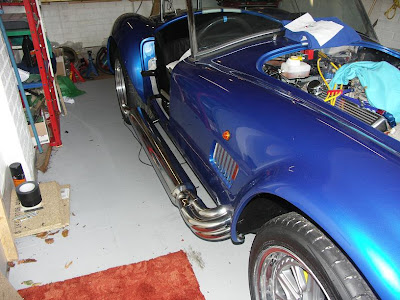 Whilst all this has been going I applied for SVA and had to prove I was an amateur builder. Application is made to VOSA an agency of the department of transport and they tell you amateur build status has to be proven to the satisfaction of the secretary of state for transport - that must be some big wig in the government ;-( Scary!!

Anyway that proved a little more difficult than I thought. Firstly they didn't agree with my engine specification (for noise testing levels) then they wanted copies of all receipts and pictures of the build stages. 100 copies and 82 photos later they say it's not enough and asked for more information on the build including a statement of how much the previous owner had done and a detailed list of what I had done.

The previous owner had intended to move to Spain so that may have been a wee bit difficult. I decided the best way would be to talk to the secretary of state or at least his representative at Swansea. A couple of phone calls later to some very nice people in Wales and I had been declared amateur - phew! Apparently my car looks like one built by a very well know professional builder ;-)

I should get a date from Gillingham SVA centre in the next 10 days or so, I'd better get those doors on.